Charmaine Lee is a classically trained dancer who at nearly fifty has the slender, pliable body of a woman half her age. She created SynergyDance to heal her body and mind after escaping from South Africa. An eclectic combination of ethnic dance, qi gong and yoga, SynergyDance uses the principles of polarity therapy to stimulate the flow of energy in the body. “There are many layers of healing in the dance,” says Lee. “You can heal yourself emotionally, mentally and physically, and tune into unhealthy patterns in your life. 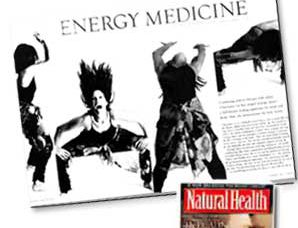 SynergyDance incorporates stretching, meditation and aerobic conditioning, plus music ranging from pounding Brazilian drums to soulful Persian voices. But for Lee and her students at Synergy Dance & Healing Arts Center in Washington, D.C., the real benefits go beyond toning and tightening. “The movements actually conserve energy,” she says, “so you don’t feel drained by the end of the class. The goal of Synergy is to find the effortless effort.”

Lee herself began to develop the dance to cope with her life as a South African refugee. In the mid-’70s, Lee’s antiapartheid politics–plus her relationship with a black man–brought her to the attention of South Africa’s apartheid government. South African police kidnapped Lee’s son (who was recovered), and, after a harrowing run-in with local officials, Lee fled her country. “I ended up in England, totally sick with a bleeding ulcer from the stress. I had no country, no legal papers, nothing to say that I was me. I was so sick, I didn’t think I would dance again.”

While in England, Lee discovered polarity therapy and began to heal her body and recover her sense of self. Polarity therapy was developed by Dr. Randolph Stone, D.O., N.D., D.C. (1890-1982), who believed that the body was essentially energy in motion. Stone relied on the ancient Chinese and Ayurvedic concepts that blocked energy within the body causes disease and that healing occurs only when the energy (called chi and prana, respectively) can flow freely between naturally positive and negative poles, or points, in the body. He utilized bodywork, diet, exercise and self-awareness to stimulate the healthy flow and balance of energy. Adapting these ideas to allow people to incorporate dance into their daily lives, Lee created SynergyDance using contrasting feminine and masculine movements to move energy. Her gentle dance moves–feminine “air” and “water” movements–for example, draw energy into the body; her dramatic, masculine “fire” moves push energy out from the body. “Energy manifests itself in our physical form as we move. When we dance,” says Lee, “we are allowing blocked energy within our body to move and release itself, giving ourselves a chance to heal.”

While the practice of stimulating energy runs counter to Western medicine’s concept of healing, the orthodox medical community has recently been taking a closer look at this whole area. “The body is a manifestation of energy,” says Vernon Sylvest, M.D., a specialist in pathology and medical director of Roche Labs in Richmond, Va. “We know that medically, and through physics.” In 1994, in fact, the Menninger Clinic discovered that the human body produces an electromagnetic field.

“Polarity,” says Sylvest, “is a form of holistic energy medicine that stimulates the body’s energy in a variety of ways–through touch or bodywork via a practitioner, or in the case of SynergyDance, through sound and movement.” Sylvest and several other medical professionals, including members of the National Institutes of Health’s Office of Alternative Medicine, recently attended a workshop on Synergy and polarity that Lee offered right from her Washington, D.C., dance studio. “Depending on the receptivity of the participant,” says Sylvest, “the potential for benefit is very great.”

“Each individual gets from the dance what they want,” says Lee. “Some people are satisfied to take it just as a workout. For others, it’s part of a much deeper process.”