Here we go . . . I said to myself as I signaled for the conference room lights to dim and the CD to begin taking us all on a musically guided meditation. Thirty-five minutes later, when that portion of the recording came to an end, there was an almost palpable silence in the room. The center of the circle was now littered with bodies, as most people had taken off their shoes and lain down to get the full relaxation benefits.

The last track of the CD, an uplifting ballad called "Honor Who You Are," with a positive, self-esteem building message, had finished, and the rhythmic and exuberant musical reprise had just begun when a woman stood up in the very center of the room and began to move and dance to the music. First I, then one by one others, arose to join her, and soon we were all moving together in a spontaneous dance of bodymind harmony.

People were having fun; smiling; and feeling energized, connected and happy! I felt as though I were at a six-year-old's birthday party, so joyous and unplanned was the activity in the room. I'd lost all traces of being a serious scientist, yet here in this workshop was the presence of all that I'd done scientifically: people feeling, healing and enjoying. With movement, music, and connection, it was a living demonstration of how we feel good when we experience being plugged into the vibratory reality of the world around us, extending and resonating our psychosomatic networks to interact with others. 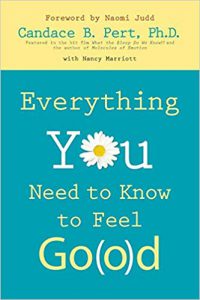 After the session, I sought out the woman who'd first begun to dance after the meditation, and was thrilled to find that she was my friend Charmaine Lee. Petite and gorgeous, as well as incredibly youthful-looking, Charmaine is the originator of SynergyDance, an expressive, energy-aware form of movement shaped by the principles of polarity therapy, a healing-arts system that encompasses Eastern and Western philosophies. Her mentor and founder of polarity therapy, Dr. Randolph Stone, believed that the human body is pure energy in motion, and her dance form had evolved from that belief.

In classes and sessions that I'd had with Charmaine over the past few years, I'd learned that her unique hybrid of dance and healing art was designed to involve body, mind, and emotions in something called "deep play." This is an adult, transcendent form of playful activity, characterized by an extraordinarily intense state. An example of this is the experience of swimming with dolphins or, as in SynergyDance, the freeing up of energy through relaxed, unforced movement.

Charmaine herself was a lifelong dancer who had lived in South Africa and London, studying and practicing educational kinesiology, yoga, qi gong, tai chi, massage, Feldenkrais, Alexander Technique and craniosacral therapy -- all modalities supported by the new-paradign physiology. She came from this rich and varied tradition into a growing field of dance therapy, a newly licensed form of treatment taught in the degree programs of graduate institutes across the country.

I hugged Charmaine and promised to give her a call about future classes, thrilled to have someone of her caliber and expertise in D.C., able to give me bodywork and help me achieve my own health goals. Music and movement, I knew, were the keys to fun, feeling good and losing weight — a combination that I knew was effective, and the science was behind it.